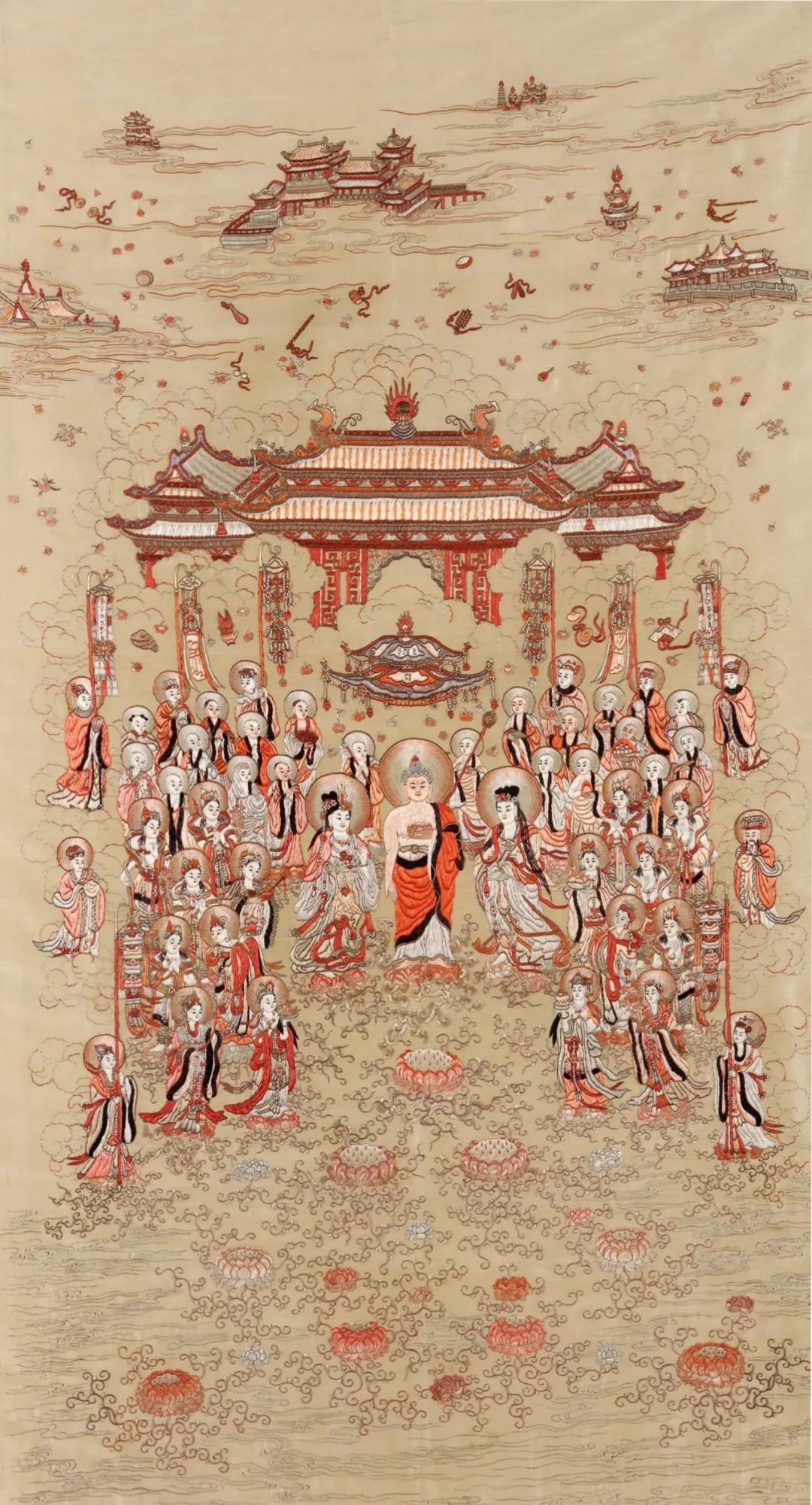 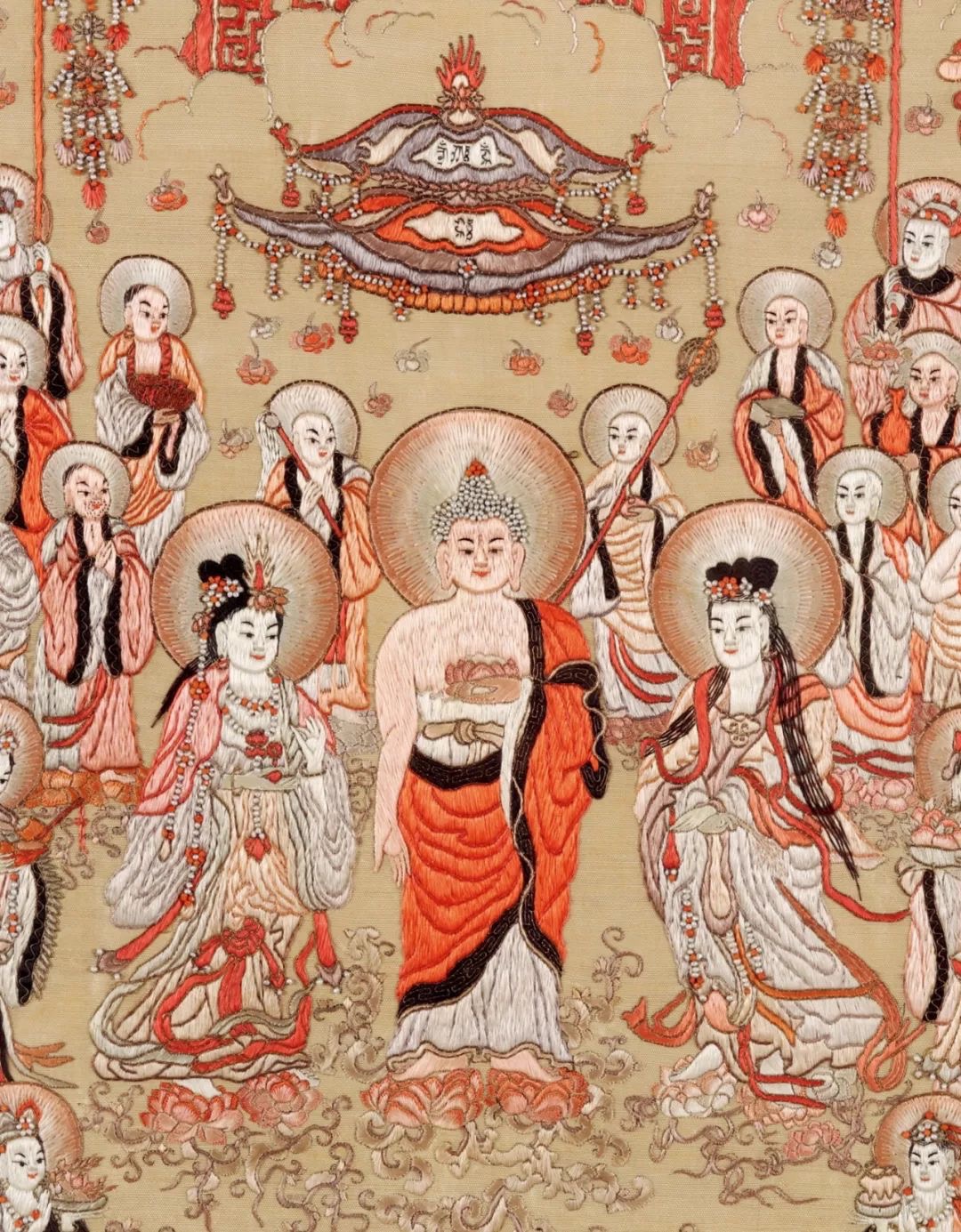 This hanging panel shows all kinds of rare and marvelous scene in the pure land of Amitabha. The main Buddha Amitabha’s head is decorated with mound of flesh, round face, straight eyes and brow, and a smile on his mouth, showing the solemnity of the Buddha. The upper body of him is covered with a right-style Kasāka and the bottom is covered with a flowing monk skirt. The lotus is held in his hand. There are eight great bodhisattvas, the heavenly girls and all living creatures listening to the dharma on both sides of Amitabha, and the light is shining behind the Buddhas’ head, which reflects the Buddhas’ holiness and nobleness. The pavilions are embroidered everywhere on the hanging panel, in the treasure pool, the flowers and trees are beautiful, the auspicious cluster, and the lecture hall and vihara where the Buddhas live built by the seven treasures are splendid and magnificent. The embroidered artists vividly described the blissful world with the scenes in the Buddha Expounding Amitabha Sutra: In the six periods of the day and night “The Flocks of Birds Sing Forth Harmonious and Elegant sounds” and “A Heavenly Rain of Mandarava Flowers”. There are many characters in the frame, the scene is dynamic, the details are slightly appropriate, there is no sense of congestion, and the clothing is presented with the pearl in the picture, which shows the skilled craftsmanship of the embroidery craftsman. 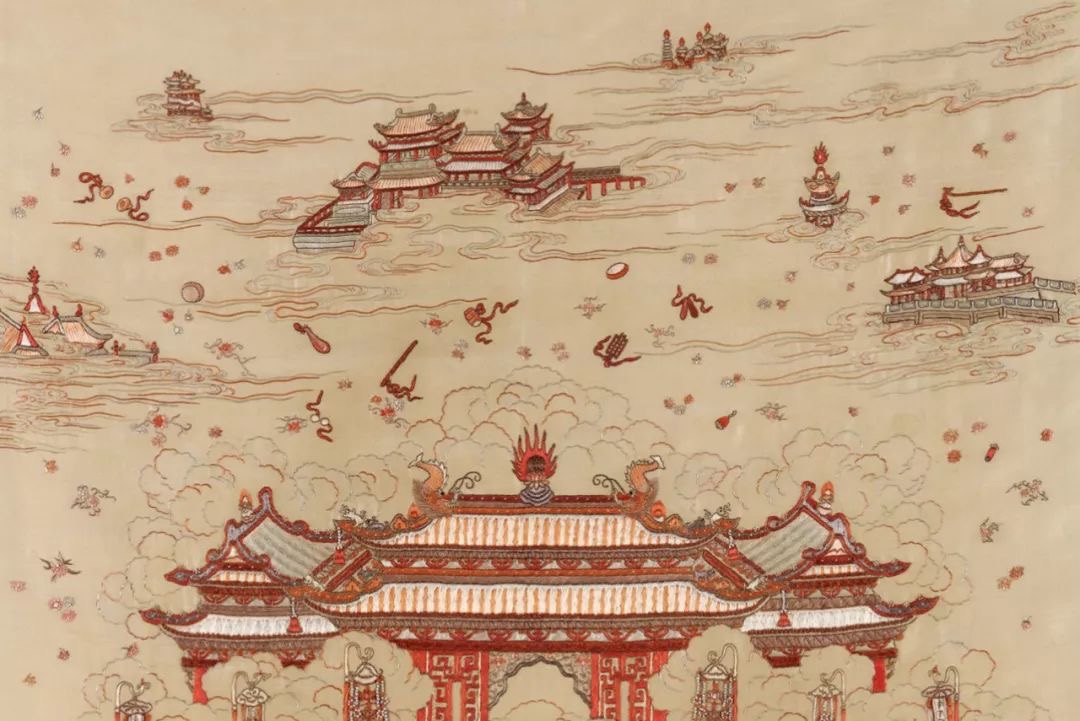 Embroidery is the totality of various decorative patterns embroidered on textiles by needles and threads. It is divided into two categories named silk embroidery and feather embroidery, which exactly use needles to make silk or other fiber, thread penetrate the material in certain design and color, forming the stitch into pattern. Embroidery is the art that add design and artifact to any existing fabrics by needles and threads. It is one of the traditional Chinese handicrafts, spreading in China with a long history. Chinese embroidery mainly consist of four categories-Su Embroidery，Xiang Embroidery, Shu Embroidery and Yue Embroidery. Court embroidery,also named Jing embroidery or Gong embroidery, bloom among Ming and Qing dynasty with its usage on decoration and dress in the palace. It differs from folk embroidery for its strict and standard Aesthetic norms of court art, consummate skills and selected materials. The ancient embroidery treasures made and collected by the Palace Museum include utility, Religious supplies and ornaments.